I’m one of those people, despite always appreciating the lack of degradation in digital music formats, mourn the demise of vinyl and large-format album art. It even took me a long time to go from the tangibility of owning physical CDs to purchasing my music in the form of MP3 downloads. Other than briefly dealing with hated iTunes for Windows I’ve gotten everything via Amazon. And, until recently, I still at least wanted to “own” my own copies. I never went in for any music subscription or streaming service.

One new feature of Windows 8 is unlimited music via Xbox music. I tried it out just to try it and found a couple of reasons to keep using it. The first is that while the feature is billed as being for Windows 8 users, the same music shows up a little later on my Windows Phone. The second is that it’s free (while still legal). That combination has overridden any objections I had.

UPDATE: I discovered I’d signed up for an introductory offer to XBox music or Live, or whatever. As soon as I cancelled all the music became unplayable. No surprise and not a big deal. I just don’t care right now about having oodles of music. No time to wade through it.

Nice use of gesture semantics (in #WP7): http://www.wpcentral.com/windows-phone-app-review-gestulator I installed it and after figuring out that the keypad is the gesture target area, quickly got the hang of it. The only unnatural thing about such an interface is having been conditioned to think of a keypad as just being for tapping. I’d actually institute some fast-moving, directional animations that obscure the screen like this: 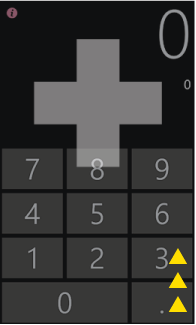