It’s far down the list of issues I’ve ever dealt with, yet the ubiquitous directional arrow has always bothered me a bit because the blades are too thick. This is because it is naively rendered using the same stroke width. I took a look at it and realized that the proper blade thickness should be based on the blades’ angle. This can be determined mathematically by taking the square root of the cosine, e.g.

The effect is less pronounced at shallow angles, more so at steeper angles (with a corresponding need for correction): 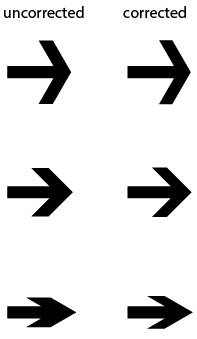 The morning after originally publishing this post, I saw a proper example of one of these arrows…on a North American Van Lines moving truck. Who woulda thunk? But a little analysis of the logo with an arrow overlaid that has blades at a 37.5° angle shows their designer was, uhm, pardon the pun, thinking along the same lines: