The developers of  the Circa News app recently posted an article describing how they’ve successfully increased positive ratings and directed user frustrations to feedback instead. Note, as they point out, there’s no way to do this without having a good app in the first place:

This is very personable: 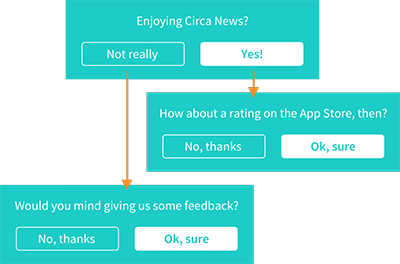 And a positive result:

“The best part about the above experience is that for those users who are truly not enjoying their experience, they’re giving us their unfiltered feedback.”

I’ve placed buttons for both rating and feedback in the About or Info sections of my apps. The ratings have been good 4.5 stars on average, but light. I do get feedback via email from users asking for features or occasional fixes.

In either case, implementing something similar might trigger more of both – and in a way that doesn’t piss off the potentially favorable reviewer. It is a little sneaky to shunt displeased users off to feedback, but apps do live and die by ratings. If they want to, users can still find the rating button. It gives them a place to vent their frustrations and gives the developer a chance to redress the issues – a win for both.

Thanks to Barrett Golding (@hearvox) for pointing me to the article.